Dead Man's Chess is a Chess-adjacent board game for 2-4 players that takes classic moves from the iconic game, and adds faction-based special powers, piece enhancements, and epic spells. In addition to this, multiple moves per turn and the ability to defend against incoming attacks add powerful mechanics that augment the classic title into something completely different and exciting; Dead Man's Chess! Dead Man's Chess is a fully developed title that will be arriving soon on Kickstarter with discounts and exclusive deals! 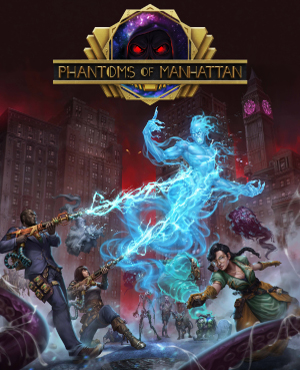 PHANTOMS of Manhattan takes you back to 1929 in lower Manhattan, where Julian Tyler has established the PHANTOMS, an organization that battles against paranormal and supernatural threats! Through the use of cutting-edge technology and experimental science, the PHANTOMS are well equipped to deal with spirits, demons, mythical beings, and an endless host of other creatures that would drive a normal person mad. Will they be able to put an end to the sinister threat that looms behind the supernatural activity, or will time run out on the world? PHANTOMS of Manhattan is in early Beta, and we will keep you posted on progress!

04-26-2022 - Dead Man's Chess' Kickstarter is fast approaching! Fabulous discounts, exclusive content, and specials for being among the first to back the title are among the highlights for the Kickstarter Campaign! Sign up for our newsletter on the contacts page to get the latest updates and be kept in the loop for when you can be a part of this epic Kickstarter!

08-18-2021 - Dead Man's Chess is progressing at a wildfire's pace, and Beta testing at conventions has begun to take place! If you have the opportunity to see V, the game designer, at a con, please reach out to him! More amazing artwork is flowing in each and every day, and we will be sharing this with our newsletter, so sign up on the contacts page to get the latest. As well, some issues with the website should now be resolved.